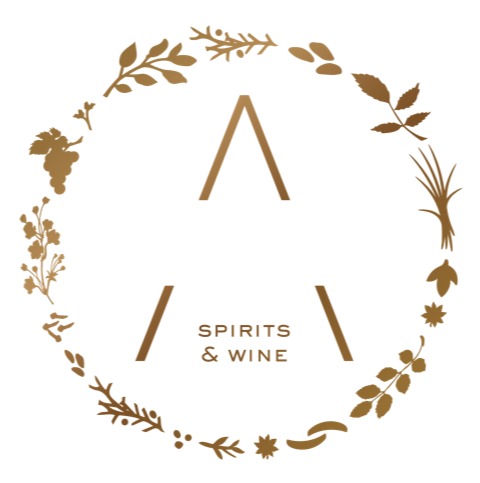 THE REGION OF TUSCANY IN ITALY IS STEEPED IN WINE HISTORY

If you don’t know already, Italy’s geography is so varied and extreme that there are microclimates all over the peninsula, and Tuscany is no exception. First, let’s start with the ubiquitous native grape varietal of Tuscany, Sangiovese, which expresses itself in as many ways as the diverse landscape, affected by different soils, climates, altitudes, and all within mere miles of each other, so that there are actually many cloned varieties of the varietal. As such, different versions of Sangiovese can produce wines that range from light and thin to rich and savory, also, as mentioned previously, depending on where the grapes are cultivated and how they are vinified. Other grape varietals are grown in the region, including non-native varietals. In fact, the historical lords of Tuscany, the Medici family, brought French varietals, such as Cabernet Sauvignon, Cabernet Franc, and Merlot, to the region as a nod to one of their own, Caterina de' Medici of Florence, aka Queen Catherine de Médicis of France, and we could devote an entire wine club selection to just these non-native varietals in Tuscany (e.g. Super Tuscans, Sassicaia, Ornellaia). But, alas, we decided to stick with Sangiovese to showcase how the varietal expresses itself in two specific appellations: Vino Nobile di Montepulciano and Rosso di Montalcino. On the white side of the wine equation, Trebbiano is the workhorse varietal of Tuscany, and because it is not noted for its elegance, it is often blended with other varietals, such as Malvasia. Then there is Tuscany’s Vermentino (Vermentino di Toscana), which is a varietal that is ubiquitous in Sardinia, but whose second home, albeit much smaller, is Tuscany with a very different expression. But we decided to instead showcase a varietal that is steeped in Tuscan history: Vernaccia di San Gimignano. CHIANTI IS THE MOST KNOWN APPELLATION(S), SO, NATURALLY, WE CHOSE TO IGNORE IT

The world’s oldest delimited wine appellation in the world is in Tuscany, and yes, you guessed it – it’s Chianti. In 1716, Cosimo III of the renowned Medici family, formally designated wine from a certain area in Tuscany to have the distinction of being Chianti, the official appellation of the Sangiovese grape varietal. Of course, not until the 20th century, and well after the French began the strict appellation regulatory process of their vineyards and wine-growing regions, did Chianti become a formalized regulatory appellation region (DOC, denominazione di origine controllata). And not only has the region enlarged considerably past the delimitations defined by Cosimo III, but there are no less than six Chianti subregions, including the most well-known Chianti Classico subregion, designated DOCG (denominazione di origine controllata garantita), which is bestowed upon Italy’s most prestigious appellations to distinguish their higher status among the already reputable, but not as strictly regulated, DOC wines. But, hold on, let’s not dwell too long on Chianti because this month’s Amaro Wine Club selection is actually purposely NOT Chianti. With our three selections, we are dipping a tiny tip of our toenail in the vast DOCs and DOCGs outside of Chianti in Italy’s Tuscany region.

The Montepulciano appellation region is on the southern outskirts of the Chianti region in Tuscany, and gets its name from the ancient town of Montepulciano (see photo), which is what all of the appellation’s vineyards surround. Rosso di Montepulciano and Vin Santo are also sub-appellations from the region, but Vino Nobile is by far the most aristocratic, and a DOCG appellation. You don’t have to be an Italian language speaker to guess that “nobile” means “noble,” and there is a reason behind the nomenclature for this wine that dates back centuries even though the actual word didn’t figure into the appellation until the 1930s. During the Italian Renaissance of the 15th and 16th centuries wine made in the “Montepulciano style” was a favorite of noblemen, kings, and popes, and there is even mention of it in a documented dated 789. In fact, in a strike of marketing genius, winemakers in the region of Abruzzo named their native varietal “Montepulciano” to capture the appeal the word had acquired in the wine world, which, unfortunately has caused much confusion in modern times between the two appellations. To be clear, Montepulciano d’Abruzzo is an appellation made from a grape varietal called Montepulciano in an entirely different political region of Italy (Abruzzo) that has nothing to do with Tuscany, while Vino Nobile di Montepulciano is a much older appellation made entirely from native Tuscan grape varietals, predominantly Sangiovese (actually, to be exact, it is one of the many varieties of the Sangiovese varietal, the Prugnolo Gentile), which must comprise, according to DOCG regulations, a minimum of 70% of the wine. The only varietals allowed to comprise the other 30% must also be native to the region: Canaiolo Nero and Mammolo are the most common. Some producers prefer to forego a blend for 100% Sangiovese, which also meets the DOCG requirements. The wine must be aged 2 years, and at least one of these years in oak barrels. A Riserva must be aged 3 years. 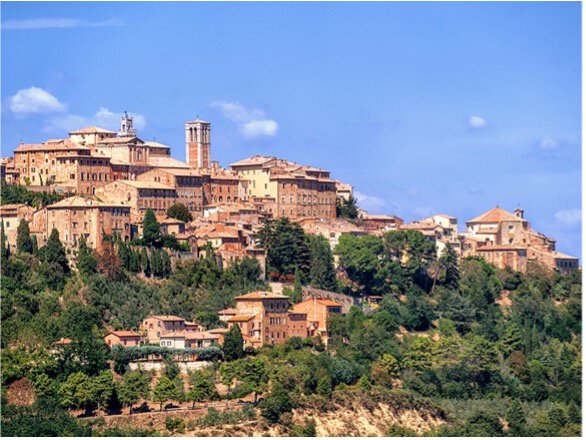 The town of Montepulciano is situated on limestone ridge 1,985 feet above sea level. The vineyards surround the town in the valleys below, but many of the wineries are actually located in the town itself

The Montalcino appellation region is also south of Chianti, and, in fact, it is close to Montepulciano, just west of it (see map on first page). Like Montepulciano, the appellation derives its name from vineyards that surround an historic town, Montalcino. Unlike Montepulciano, this winemaking region does not quite have the level of recognition and history around the product of its vineyards. That said, there are records from the 14th century of a “notable red wine in the Montalcino area,” and more specific mention of aged Sangiovese wines coming from Montalcino vineyards begin to proliferate in the latter part of the 19th century. By the end of World War II, the Brunello (a local word for Sangiovese) di Montalcino was coveted as a rare, aged, prestigious wine. In 20 years time, in 1968, Brunello di Montalcino was awarded DOC status, followed by DOCG status in 1980. The Brunello di Montalcino is the most recognizable wine from the regional appellation; however, because of the labor-intensive process to bring it to fruition followed by extensive aging, a younger version of the appellation, the Rosso di Montalcino, came into being. Brunello must be made from 100% Sangiovese, and the grapes must go through an extended maceration period to extract as much flavor and color possible from the skins before fermentation. Then the wine is aged a minimum of 3 years (usually more) in large Slavonian oak casks (botte), or in small French oak casks depending on the winemaker, or a combination of both, and at least 4 months in the bottle. The Rosso di Montalcino appellation is just a younger version of this, allowing Brunello producers cash flow while the Brunello ages, and presenting a more affordable, albeit still high-end, alternative. Rosso di Montalcino, designated a DOC appellation since 1982, must age in oak at least six months and be aged one year total. The result is a lighter, fresher wine than Brunello that can be consumed immediately, but which also carries the heft and depth that comes from the labor-intensive macerating process that begins the Montalcino winemaking process. 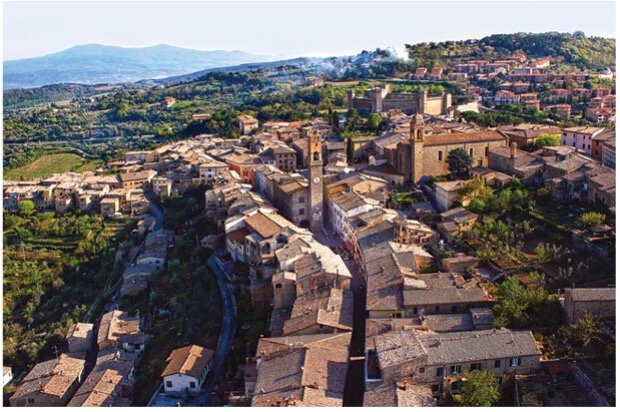 Although with a robust political and economic history dating back to the Middle Ages, severe economic decline was only recently reversed post-World War II by the success of the Brunello wine.

As mentioned earlier, Trebbiano is the white grape varietal workhorse of Tuscany, mainly because of its hardiness and ability to grow almost anywhere. Following by a distant second is Malvasia. The Vernaccia is practically their opposite in that it is much more difficult to cultivate. Yet, it was one of the first Italian wines to reach DOC status, in 1966, and was upgraded to DOCG status in 1993. Some of the credit for its marketing can be given to San Gimignano, the walled city housing a castle that was for centuries a stopping point for Catholic pilgrims on their way to Rome and the Vatican. Historians now like to call it the Manhattan of the Middle ages as it was world famous for its high towers that presented an impressive cityscape skyline towering among the thickly forested land surrounding it. To this day, many of the towers exist and its city wall encircling it is mostly intact. Although Vernaccia is grown elsewhere in Italy, the grapes planted in the sandstone vineyards around San Gimignano express the varietal the best, according to most wine experts, lending the single-varietal wine an elegant, distinctive, crispness. It also has just enough heft that some vintners are even aging it in oak with some degree of success. 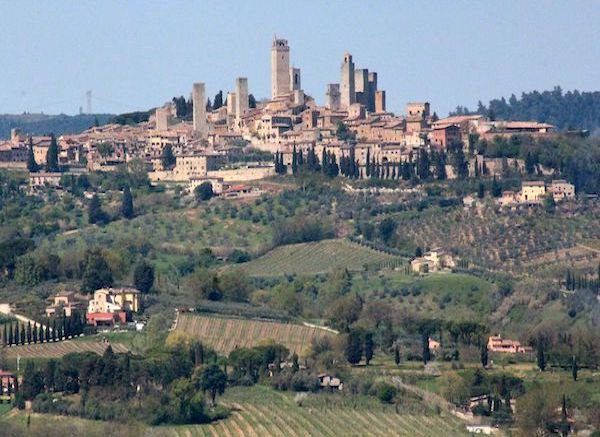 San Gimignano's impressive skyline was awe-inspiring to pilgrims emerging from the surrounding forest on their long, arduous journey to Rome

Following are the wines we selected to represent the three appellations outlined above. The Nobile di Montepulciano and Vernaccia di San Gimignano are not from our shelves, while the Rosso di Montalcino has been a staple of our store since its inception. Both of these red wines are worthy for aging in your cellar or wine cellar for at least 5 years, if you so feel inclined, but they are also ready to drink. We suggest letting them breathe for about 40 minutes, however.